Gathering food while you can. 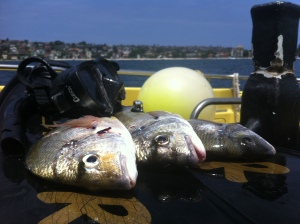 In my job I am lucky enough to work on the beautiful Sydney Harbour. My work varies from towing broken down boats to diving underneath them at all hours of the night in the murkiest parts of the rivers. Often when I am diving under the boat I am knocking barnicles, mussels, crabs and other fish food off the hulls and propellers.

I noticed fish would school underneath the boat while I work cleaning up the tasty morsels. I thought I should start bringing a speargun to work. My boss is a top bloke so he didn’t mind. Like day follows night another customer eventually ran over a mooring and tangled his propeller. He was in a clear part of the harbour near the entrance to the ocean. Off I went keen to secure some Bream for dinner.

As I worked sure enough the fish appeared. In no time at all dinner was secure with three fine winter bream. I bade the customer goodbye, gutted and iced the fish then headed back to base.

Other spots I have found productive for simple table fish such as these is around structure like wharves. Sometimes I will scan a bay and look for the “mooring minders”. These are run down boats that are bought by owners so they won’t lose their spot on the harbour. These boats are neglected. You can spot them from the amount of growth on the hulls and the seagull rookery on top. The fish are always underneath boats like this.

Give it a try sometime. No special gear needed.