Why do we hunt?

Recently an old friend found me on facebook. The last time I had seen her was when I was a teenager. It had been around 16 years. All went well with small talk until a few nights ago.

I had been on a successful trip chasing sambar deer in the state of Victoria. A friend had tagged me in a couple of photos. One of which had me sitting behind a deer with a friend. It was his first and he was understandably thrilled not only on his achievment but the meals that would follow. 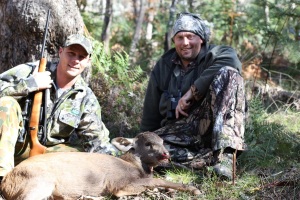 Another friend called up asking me who the abusive person was on my profile and on his photos calling me all manner of names. I arrived home and logged on to have a look. There she was hurling abuse at me, my friends and for some reason my father apparently for being responsible for my birth. She was using very powerful language and expletives which usually wouldn’t rattle me,  but because I knew her personally it did. Her opinion was coming from someone who obviously knew little about how I hunt or hunting in general. She admitted she ate meat and used animal products. Her understanding of animals was likened to human behaviour and emotions. I tried to reason with her and explain my reasons privately but was banned from her profile before I had a chance. My father did the same but was promptly cut off as well.

I want to explain for anyone reading this page the reasons why I and most people I know hunt. From a young age I have been fascinated with animals. I collected any I could find and catch as a young fella. I climbed trees and lifted up rocks. I waded in the mangroves and clambered around cliffs. I read books on birds, mammals, fish, insects, plants and anything I could get my hands on. I kept pets of many varied types from reptiles to axolotls. I bred birds and fish. Unfortunately death and understanding it,  is a part of these hobbies.

As I grew I realised some animals can be pests. We have foxes and cats in Australia wreaking havoc on our wildlife. We have pigs destroying farmers crops as if drought and flood aren’t enough to contend with. We have camels trampling our sensitive desert areas. Any realist would have to understand we need to combat these pests. To let them multiply unhindered will see much damage occur to the environment. I still love all animals. Watching them native or non native is special. From small birds going about their business building a nest to two big buck kangaroos fighting for dominance. Its all a part of nature’s tapestry as is death.

Professionals conduct culls in areas that have big populations of pests. It is a shame to me to see the meat left to rot on the ground and not being utilised.

The main reason for me starting to hunt with a rifle or bow was for the table. With the cost of living in Australia going through the roof why not fill the freezer whilst spending time with nature. I could only see positives. My family now eats beautiful free range meat. These animals have never felt borders, have lived a life doing what they want to do and eat what they want to eat. They’re never trucked to an abbotoir or contained in a feedlot. They’re never placed on a conveyer waiting for a bolt to the brain. I know where each animal has come from and I know how it was treated from the moment I took responsibility for its life. That is like precious gold.

Obviously not all animals can be consumed. Animals like foxes and cats are strictly off the menu. Pigs full of parasites are not coming home with me either. A look at the stomach contents of a cat or fox confirms that I am doing the land a favour though. They are full of our native lizards, mammals, birds, and insects. Its not a task everyone can do but it is a necessary one.

The hunting instinct is alive and well in humans. Something that will never change. Many think we have evolved beyond it. Its not true. In some it lies dormant but it is there. Our ancestors would never have survived cold harsh winters without the consumption of other animals. My Scottish ancestors on one side hunted to survive and on the other side my Polynesian ancestors did the same. Why is it ok for Aboriginals in Australia to hunt and not me? What makes us different? We are both human and both have the same instincts. Why is it acceptable for them only? Are they telling me I am more evolved than my native brothers?

People also ask me why I have my photos with the animal whilst smiling? Why do I put the deer’s head on my wall? For me its about respect and memories. The animal is remembered in reverence in the photo. It could represent a hard slog in some unhospitable terrain with a mate or a long drawn out stalk on a wily old hind. The smile is one of fulfilment of a cleanly taken animal and the realisation I’ll be carrying the meat a long way back to camp. Its not about me standing over an animal in an act of dominance and bloodlust.

Why the head on the wall? Not only do I eat his meat but my connection to the animal continues by being placed in a spot I can still look at, admire and remember it. A glance at him brings back a flood of memories for me. My ancestors also practiced this behaviour. If that’s not respect and reverence please tell me what is.

I find it a shame in our modern age children and many adults have no connection to the land or animals. The closest they get is getting their milk from a container in the fridge or their meat sliced up on a foam tray complete with absorbent mat to soak up any unsightly blood. They have no idea of the processes involved to get that animal or product from the farm to the shop and into their fridge. The last time most people even think of that animal is when they press the flush button on the toilet. You tell me who respects their food more.

Thanks for reading. I hope I have explained my reasons clearly and have given you some food for thought. Please comment if you want to as  I welcome healthy debate.